Simple Plan’s presence at the Pro-Am Gagné-Bergeron charitable celebrity ice-hockey match that takes place every year in August and that aims to raise funds for various charitable organizations, including the Simple Plan Foundation, has already become a tradition. And just like last year, the band was once again happy to perform at this charitable event, and Simple Plan’s drummer Chuck Comeau even got to put his skates on and join the eventually winning team composed of many NHL players in the ice-hockey match. Overall this year’s event raised $450 000 in total.

Per Simple Plan’s request, this year’s concert was not held in the middle of the ice-rink (far away from the audience), but in order to give the fans a more intimate experience, the band decided to perform in the lobby of Centre Vidéotron in Quebec City. Many fans appreciated this change, since it has given them a much better concert experience to see the band perform from up-close.

Thanks to our reader Audrey, we got ahold of the setlist of Simple Plan’s performance yesterday, which you can now check out here:

And finally, once again big thanks to Audrey for being our eyes and ears at the event yesterday – here’s a number of pictures she took of Chuck at the game as well as during the Simple Plan show later on: 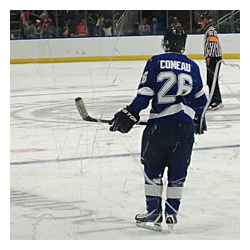 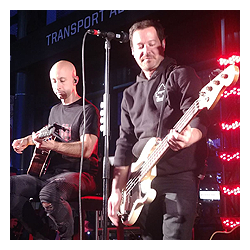