This December, Simple Plan will be embarking on a long journey back to Down Under, where they are scheduled to appear at this year’s edition of the Good Things Festival alongside bands like Enter Shikari, Parkway Drive or A Day To Remember.

Rumors have been going around for quite some time now, whether some of the bands would be prolonging their stay in Australia by playing a couple of sideshows besides the Good Things Festival. And the good news came in just last night when it was officially announced that some of the bands on the festival’s bill will truly be playing a number of shows around Australia in December. 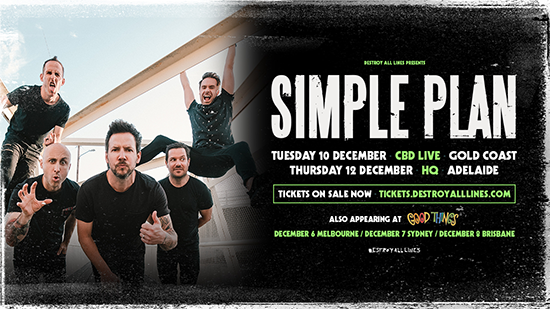 Simple Plan will be appearing at two more shows besides the three dates of the festival (Melbourne, Sydney and Brisbane) and these sideshows will take place in Gold Coast (December 10th) and Adelaide (December 12th). The guys will be playing in quite intimate venues (Gold Coast’s CBD Live fits only 1300 people while Adelaide’s HQ is fit for 2200), so chances are these shows will sell out quick. So make sure to get your tickets asap by clicking on the links below: