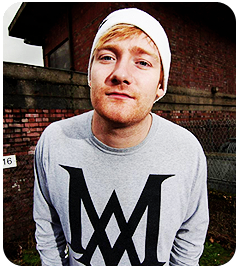 When The Bottom Line were added to the line-up of Simple Plan’s European tour as the second opening act (after Ghost Town, who were announced long before), nobody could have even imagined how well-fitted this band would be to tour with Simple Plan and how many fans they would gain from this tour. The truth is, The Bottom Line proved to be a tough act to follow and because of their great live performance skills, they were asked to return as the opening act for Simple Plan again, on the second part of their European tour, which began last week.

SimplePlan.cz caught up with The Bottom Line’s lead singer Callum Amies in the following interview, in which we discussed his relationship with Simple Plan, best (and worst) memories of the tour, his band’s upcoming plans and much more. Big thanks goes to Cal for patiently answering all the questions on his flight to mainland Europe.

Check out the interview below:

What were your beginnings as musicians? How did you guys start out as The Bottom Line and how and when did Tom join the band?

Callum: Me, Matt & Max all went to the same school together and when all of our bands we were currently in broke up back in like ’08, we started just jamming after school. Mainly playing Alkaline Trio and Blink-182 covers before starting a ‘real’ band (At least we thought it was) titled ‘Thursdays Bad Luck’. We basically were just a joke band that played every bar that would have us and we would try and get as hammered as we could get, while on stage playing proclaimers covers – it was awesome! In 2011 we kinda made a group decision to try and take this band to the next level, and to take it on the road and tour like all the other bands we were friends with. We decided to have a complete re-brand and call ourselves ‘The Bottom Line’. We toured relentlessly for around 3 years, while making good friends with Tom through his festival, Teddy Rocks and from playing shows with his other previous bands. Our relationship grew stronger with Tom and he started to become more of a friend rather than just a guy who plays in a band we know and in 2015 we made the decision to try out for a 4th member. Tom came for one practise and we decided there and then that’s how The Bottom Line was going to remain.

I know that originally there was supposed to be only one opening band for the first part of the European tour – Ghost Town. How did you get to be added to the tour’s line-up? How was it set up?

Callum: We met the guys for the first time at Reading Festival in 2015. We got chatting to them about all different types of things and when mentioning we played in a band, it turned out that Seb had previously played us on his radio station (Idobi radio) which led to many more conversations, phone calls to managers and a lot of begging, but eventually the band agreed to let us open the 5 week run in February and play a short but sweet 25-minute set.

What was your relationship to Simple Plan and their music before you got to tour with them? Were you fans? Have you ever seen them play before?

Callum: We’ve always been fans! At rehearsals we used to watch ‘Live In Australia’ and take notes on how they gain reactions from the crowd, but unfortunately had never had a chance to see them play. So to be able to build an amazing friendship with all the guys and see them kill it in front of 2-3,000 people every night for 2 months straight was an absolute pleasure!

Sometimes headlining bands like to keep a little distance from their opening acts, but I have a feeling that wasn’t the case on this tour. What was touring with Simple Plan like? Did you get to spend enough time together to get to know each other?

Callum: We hung out almost every day. I think The Bottom Line are probably just one of the easiest bands to get a long with. We don’t come on tour to sit in our dressing room and wait to play. We want to build friendships with everyone we meet! We literally LIVE to have fun. That’s what this band is all about!

Pierre and Chuck from Simple Plan used to have a clothing line called ‘Role Model Clothing’ and your album from 2012 is called ‘Role Models?’. Were you aware of this or is this just a funny coincidence? Why did you decide for that album title?

Callum: It is a complete coincidence! ‘Role Models?’ is almost a complete joke title as the question mark suggests that maybe we AREN’T the best role models after all. Definitely not back then anyway!

Your live sets and your overall attitude is very similar to what we know from Simple Plan – you are very interactive with your crowds and you always make time for your fans – you even often played free acoustic sets after the shows on this tour. Is that something you’ve always done or did you only start doing it on this tour, where you knew you had the chance to reach out to new audiences and try to win the hearts of as many fans as possible?

Callum: For us this band is ALL about the live show. If people don’t walk away from our show thinking ‘Holy shit what the hell did i just see?’ – then we haven’t done our job properly. We want people to be blown away by our performances. We’ve been bottled up for so many years playing tiny club shows in bars to about 10 people or less that now we are finally ready to show the world what we’re all about! As for the acoustic ‘shows’ – it’s not necessarily something we’ve always done. But we do like to make sure we hang out with all of the fans after every show. And because we have been playing such short sets on the support tours, it’s nice just to be able to give people just that extra bit of music!

On many dates of this tour, you did a prank on Simple Plan by entering their sets during their party medley – sometimes wearing nothing but their new SP underwear. Who came up with this idea?

Callum: This got out of hand very quickly. Most mornings on the tour we’d sit in catering with SP and just joke about making asses of ourselves, As we are always known as ‘The Tour Clowns’. One day, Jeff suggested we should dress up in their range of girls’ underwear. Now, anyone who knows The Bottom Line, knows, that we don’t like to back out of a dare. We thought we’d prove to them we would do it but in true TBL Style – in front of 4 000 of their fans.

I’m sure a lot has happened on this month-long tour, but what is the best story you can remember from the road?

Callum: I think it would definitely have to be the bus crash on day #1. Nothing will ever compare to how weird and crazy that 48 hours was. But that’s a whole other story!

Throughout this whole tour, you’ve received accolades from many fans and also from Simple Plan as well, who’ve been very fond of you – even wearing your merch on stage. Is there something they’ve said about you that you’ll always remember?

Callum: One day on the tour we were all just minding our own business in catering eating our breakfast when Pierre came in and started talking to us about our band. To which he followed with the line ‘You guys are by far THE BEST support band Simple Plan have ever had on tour.’ We were all pretty speechless to say the least!

How would you say the tour with Simple Plan has affected your lives?

Callum: It’s just made us a better band. We’ve learnt so much from SP in those 5 weeks, we’ve become more natural on stage, more appreciative of everything we receive and I think we’ve just learnt how to be an actual band. I’d say we’re forever in their debt.

You’ve recently announced you will be joining Simple Plan also for the second part of their European tour – do you have something new in store for the fans who have already seen you on the first part of the tour – e.g. when it comes to the live shows? New setlist maybe?

Callum: We’re definitely mixing the set up a bit! We sat down and discussed what worked and what didn’t from the previous shows, and replaced the songs with ones that will suit the crowd better.

What’s next for The Bottom Line? Are there any plans on releasing a new record? After all it’s been almost 4 years since your album ‘Role Models’.

Callum: A new album is 100 % in the works. I’d say it is 90 % written and we know exactly how we want to attack it. It is just a matter of finding the funds to make it a reality. A possible crowd funder may take place when we think we are ready, but we don’t want to rush this one. ‘Role Models?’ allowed us to do so much just from releasing it off our own backs, so this next record needs to absolutely blow people away.

Wanna check out more SimplePlan.cz interviews?
You can watch or read through them all in this section!