Back in February we informed you that this year, Simple Plan’s drummer Chuck Comeau would become one of the five panelists of the annual Canadian book competition Canada Reads, in which each panelists chooses one Canadian book and then has to defend it in a series of debates. After each debate, one book is eliminated until only one book remains. This book is then billed as the book that all of Canada should read 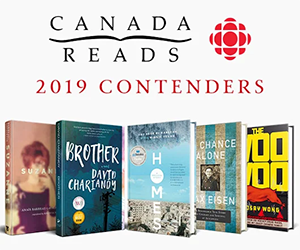 and the publisher of the winning book then donates a portion of sales proceeds from it to a charitable organization working in the field of literacy. Chuck will be defending his chosen book ‘Homes’ by Abu Bakr al Rabeeah and Winnie Yeung against the books chosen by his other panelists that include Yanic Truesdale (actor – Gilmore Girls), Lisa Ray (actress, model), Ziya Tong (TV personality) and Joe Zee (fashion stylist).

Ahead of the series of debates, Chuck got to discuss his chosen book ‘Homes’ directly with its authors Abu Bakr al Rabeeah and Winnie Yeung and all of that was captured on the following video. Have a look to get an idea of what the book is about and see Chuck’s view on it through a series of questions and answers in this interesting interview, in which we can see Chuck on the opposite side of the interview chair for once:

Today, Chuck was in Toronto to take part in Day 1 of the official Canada Reads debates, which were streamed live across many platforms this morning local time. Great news is that Chuck’s chosen book ‘Homes’ made it safely past the first day, which means Chuck will keep on defending ‘Homes’ in tomorrow’s debate again. Below, you can check out his debating skills in the replay of the livestream of Day 1 of Canada Reads.

And we’re still not finished with Canada Reads news! One of the promotional videos filmed with the panelists in advance of the big Canada Reads week featured the quintet playing a ‘book jenga’ and answering some interesting literature-related questions. Check out the video below to find out what Chuck’s favorite word in any language, how he would sum up his chosen book in just one word or what the importance of literature is today to him: