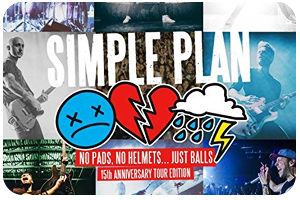 Simple Plan ringed in the new year with massive New Year’s celebrations and a performance at Niagara Falls after which they decided to lay low for a little bit to gain some strength after 2017, which was filled with touring. In March, the band then repeated their appearance at the Walt Disney World resort in Orlando, FL, where they performed for 3 consecutive days with 3 sets each day. To honor the previous year’s 15th anniversary of their debut album ‘No Pads, No Helmets… Just Balls’, Simple Plan released a special anniversary tour edition of this album in April, which also featured a number of tracks recorded live on their anniversary No Pads tour. The timing of the re-release was set to coincide with Simple Plan’s final No Pads tours, which led them to Australia, New Zealand, Brazil and Australia in April and May of 2018. And what a tour it was: some shows sold-out almost immediately, there were some marriage proposals that took place during the SP shows and some fans even got to hear ‘Vacation’ live! 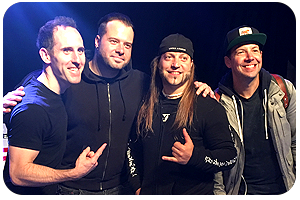 In June, Simple Plan’s previous band Reset reunited once again in their original formation featuring Pierre and Chuck from Simple Plan at the Montebello Rockfest and performed some of their classic hits from No Limits and No Worries. The highlight of the summer of 2018 was however the final edition of Warped Tour (as we know it), where Simple Plan were asked to return for the very last time. Given that Simple Plan performed on the tour 12 times in total, they have become the second most frequent band to grace Warped Tour with their presence.

Warped Tour was extremely good to Simple Plan: not just massive crowds and fantastic atmosphere but also some amazing friendships were formed on this tour between SP and other bands. Over the course of the summer, Simple Plan even 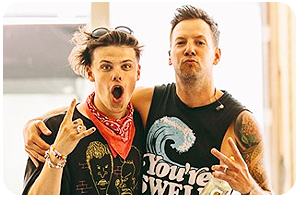 offered some of their old and new friends to join them on stage and sing on ‘Grow Up’ with them while Chuck was surfing in the crowd and Pierre was drumming in his place. The addition of We The Kings, Waterparks, Bowling For Soup, Tonight Alive, Yungblud, Don Broco, Cassadee Pope, Story Untold, Set It Off, State Champs or 3OH!3 on their stage made the Simple Plan sets some of the most memorable on the whole tour. To repay this favor to some of their band friends, members of Simple Plan also appeared on other band’s stages – most notably with State Champs, Bowling For Soup or 3OH!3. Thanks to Peter John, the Australian filmmaker who joined SP’s crew on Warped Tour this year, we also got to see a little bit behind the scenes of this punk rock festival with his daily vlogs.

After the end of Warped Tour, Simple Plan officially ended their TOFTT tour cycle at the International Balloon festival in Canada in August. Besides this, August was also filled with some other news: SimplePlan.cz celebrated its 11th anniversary, Chuck performed at another charitable ice-hockey match and The Bottom Line released a new music video for their song ‘Reasons’ featuring footage of members of Simple Plan. 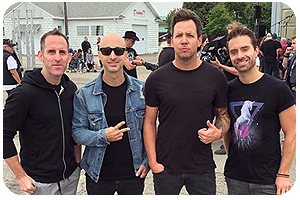 And that was not the only surprising cameo news we’ve heard of by the end of summer! In September, the fans were surprised to find out that Simple Plan were going to be featured in yet another movie – the band flew to Minnesota to film their cameo in Summertime Dropouts, which should be coming out next year.

After September, the band members all went back home to rest for a bit but also to slowly start working on some new ideas for Simple Plan’s next record. And while they were busy doing their thing, the Summer Paradise music video (feat. Sean Paul) hit a huge milestone: 100 million views on YouTube, making it the most watched SP music video on this video streaming website. In November, Simple Plan then did a one-off special concert performance at the Slippery Rock University and later on their new song ‘Bigger’, featured on the Racetime animated movie soundtrack, was released and MXPX also released a new Christmas song called ‘December’, which featured Pierre Bouvier. 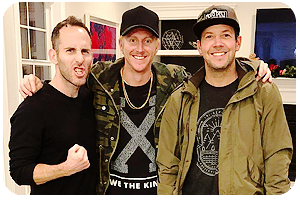 The most welcome news then came at the beginning of December when Pierre and Chuck were revealed to be already very busy working on Simple Plan’s 6th album and songwriting with various people from the music business. First, we found out that the duo was writing with the former Neck Deep member Fil Thorpe-Evans and a few days later it was revealed that Chuck and Pierre spent several days writing songs with Travis Clark from We The Kings.

First of all, while we don’t know many specifics about 2019, there’s already a few things that a certain: Simple Plan will be back on tour at least in some way next year. They are already scheduled to appear at the Garden Rocks festival series at Walt Disney World in Orlando in March and they were also recently confirmed to be appearing in the United Kingdom at the Slam Dunk festival in Leeds and Hatfield in May.

However the biggest topic of 2019 for Simple Plan should certainly be new music. Now, note that I purposely didn’t choose to use the word “album” as the band members themselves have stated that they are thinking of possibly changing things around and perhaps releasing a few tracks first and then when they have enough songs to make a great album they might release that as a whole. That could mean that there might be some new Simple Plan music in 2019, but the question is whether there will be a full 6th record done by the end of the year or not. There’s no need to be worried about this new possible way of releasing music – this could mean that SP might embark on tour to see you even before they release a whole new album, while at the same time having new music for you to rock out to at their shows. It would be a win-win!

As far as the music concerns, Simple Plan have said in a number of interviews that they would like to keep it in the pop punk direction, and perhaps modernize the sound of No Pads on the next album. These statements should however be taken with discretion as nothing is set in stone as of yet as the band is still in the song-writing stage.

One thing about the new album is clear though: Simple Plan confirmed earlier this year that David Desrosiers, who’s been absent from tour since 2016 due to his personal battles with depression, will definitely be involved in the making of their next record. That is surely a relief to many fans who were very eager to hear news regarding David and his further involvement with the matters relating to this band.

TOFTT tour cycle is done and so it the No Pads anniversary one and here at SimplePlan.cz we cant wait to take you on another journey of the process of making a new Simple Plan record. As always, we’re stoked to be here to reveal new information about new SP music step by step in the coming months and get you more and more excited for what’s to come in the world of Simple Plan. We hope you’ll join us on this journey.