Home » Online » About the author 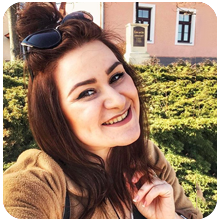 Dominika Marsová (born August 23rd 1990) from the Czech Republic is the webmaster of SimplePlan.cz and has been creating websites about Simple Plan ever since 2005. In that year she started her first “big” blog about Simple Plan, which she transformed into SimplePlan.cz in 2007. Besides her website, she has aquired a master’s degree in media in 2015 and currently works in marketing.

Her first time meeting Simple Plan was in April 2008, when Simple Plan visited the Czech Republic for the first time. Since then, Dominika attended 27 Simple Plan shows in total – in various European and Canadian cities (Prague, Vienna, Munich, Frankfurt, Stuttgart, Bologna, Warsaw, Antwerp, Amsterdam, Nottingham, Manchester, London, Rome, Berlin, Hamburg, Toronto, Montreal and Quebec), where she’s met the band every time. She also stood behind the organization of crowd sign surprises for the band in Prague in 2008, 2011 and 2016.